New Orleans is no longer, which sucks pretty solidly for its former inhabitants. Sure our pump prices are ridiculous now, but drive less and send your savings to the red cross. I did. They could use our help. 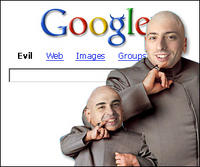 It’s getting difficult to determine if I’m just the sort of person that likes something better when not everyone knows about it. But I’m getting a little nervous about Google and their machinery of innovation.

No one doubts that google has put out some great stuff. I use their software every day, and think it’s the best thing since (insert favorite cliche here). And even though some people like to compare them with Microsoft, they are definitely a better company morally than those guys in Redmond. Microsoft steals and plunders, and Google invents. However, I’m a little worried that their sheer success at innovation is in fact stifling it.

Case in point. This past week they released Google Talk, which has the better-than-average potential to become the only free instant messaging and voice platform around. Farewell AIM, MSN, ICQ, Skype…. Again, they triumph by making a program that’s simple to use, uncluttered by useless features, and well-integrated with their existing platform. Why no one did this before astounds me, but this is the story of practically every one of google’s successes. They succeed by making simple things simpler.

Now, I’m not going to argue that it’s bad that they take over the world of IM. I’d prefer that all my friends are on one service anyway. The only reason they succeed is because they’re better, and the reasoning goes that if someone else came out with better software, they could succeed as well. Therein lies the grub.

Google is so insanely successful at turning out software on the upper curve of perfection, that it’s hard to imagine that anyone could possibly improve any of it with enough magnitude to attract attention. After all, their business is information, so for all intents and purposes, they control our attention. Stop: Does that scare the bejesus out of anyone else?

So with one seemingly simple stroke of the hand, they have wiped out a handful of competitors, including many startups with venture-capitalist backings. When Skype dies because of the success of Google Talk, how many investors will be eagerly lining up to invest in the next internet venture? The world of venture capital suddenly becomes a game of hide-and-seek with Google. The first question asked of every entrepreneur these days is “when google releases your same product, how will you survive?” Notice the inevitability of this statement. It’s a tough question to answer, because, frankly, I know I probably won’t. It’s as if I know the storm will come someday, but I have to decide if I want to build a house anyway.

And this is bad because lone inventors will always be better at innovating on a small scale than companies like Google. But if I know I’ll only have to wait a few years for Google to come out with the product that’s on my mind now, why don’t I just sit back, relax, and enjoy the ride? Unfortunately, I think a lot of creative types will.

An interesting note and a sad commentary on our society follows. If you aren’t a hunt-and-peck typer, look at your keyboard. Look at the plus (+) sign. Now look at the minus (-) sign. You have to hit shift to generate a plus sign.

What’s the reasoning behind forcing me to go through this extra effort to type a plus instead of a minus? Really. I want to know. Shouldn’t we be adding more stuff than subtracting? There’s no way the equal sign is more important than the positive sign, unless we live in a world where negative equations and bank account deductions are the most important thing there is.

Is this a conspiracy launched against positive-thinking people everywhere? I think so. The only reason I used to sign my e-mails with a negative sign was because it took less effort. How could I be so blind to the tyranny?

From this day forward, I will sign my name “+b” instead of “-b”. For, with every press of that shift key I am standing in firm defiance of the negative.